Travel back in time to see Antietam’s battlefield as it looked 134 years ago.  Our first stop is D. R. Miller’s farm, around which swirled fighting in the bloody Cornfield…

By David A. Welker

One of the most enjoyable moments when researching history comes in finding something new, even when that thing is quite old.  Thanks to brothers T. D. and Walter Biscoe we enjoy this experience today, exploring a few of the many pictures the two took of Antietam’s battlefield in August 1884.  I also want to thank Jake Wynn, who works at Antietam’s Pry House, for sharing the existence of these great photos.

The Biscoe brothers were two of Reverend Thomas C. and Ellen E. Lord Biscoe’s nine children, born in Grafton, Massachusetts where their father was a pastor in the Congregational Church. Thomas Dwight Biscoe (1840 – 1930) completed his studies at Amherst College and East Windsor Theological Institute.  Serving  as a  Mathematics professor at Amherst, he studied for a time in Germany before joining the faculty of Marietta College in 1874.  A professor of sciences at Marietta, Thomas taught chemistry, geology, and physics as well as chronicling the local weather for the United States Weather Bureau for 40 years.  Throughout his adult life, Thomas was devoted to the relatively new personal hobby of photography.  [1] 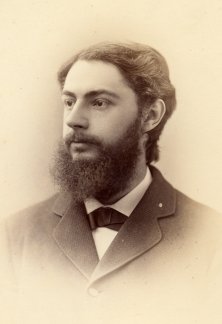 Despite considerable professional accomplishments, perhaps the Biscoes’ greatest, unsung achievement was photographically recording many of the Civil War’s battlefields just 19 years after the war, before the War Department and the National Park Service preservation efforts altered the landscape.  Captured during the brothers’ August 1884 travels through Maryland, Virginia, and West Virginia, these photos show both how the land and people living there had recovered and how the war’s scars remained evident.  Nowhere are these changes and affects to this sacred ground move evident than in their several photos of Antietam.

First up is one of the brothers” most significant images, of D. R. Miller’s house:

This remarkable image shows the Miller house and farmyard through which Union General Gibbon’s Iron Brigade fought early in the morning, leading the right-hand portion of General Hooker’s opening attack that became bogged down in the Cornfield.  On the left is the original Hagerstown Pike, which became the scene of terrific fighting. The Iron Brigade’s Major Rufus Dawes described the Miller farm: “In front of the woods was an open field; beyond this was a house, surrounded by peach and apple trees, a garden, and outhouses.”  [4] 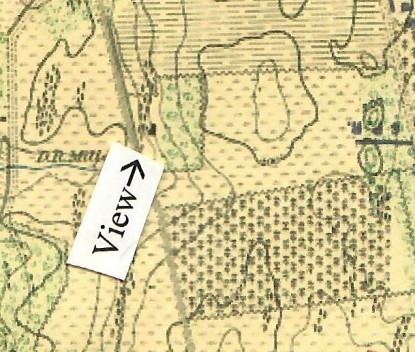 The D. R. Miller farm, showing the direction in which the Biscoes’ photograph was taken.

You may be more familiar with the below picture of the same house, taken shortly after the battle in 1862:

Magnifying the image reveals other wonderful details, including:

The Biscoes photographed it looking northeast

Some of D. R. Miller’s family on the porch.  Although David and Margaret Miller retired and sold their farm in 1886, they remained for the Biscoes’ 1884 visit.  Although these persons remain unidentified, they may be the Miller’s youngest children (perhaps 21 year old Robert, Frederick-19, or Charles, 16; the women might be 26 year old Nettie, Marion-17, or 15 year old Maggie.  The younger children pictured are perhaps the Miller’s grandchildren.  [5]

Still visible are the faded remains of the tree’s painted lower trunks, which dominate the foreground of the 1862 image.

Also visible in this enlargement, on the right, are the Miller orchard trees and a portion of the surrounding picket fence.  The adjoining north and south wings of the fence (the portion pictured here next to the house was added after the war) became an immovable obstacle to five companies of the Iron Brigade’s 7th Wisconsin.  When the 7th’s Major Dawes’ order to tear down the fence proved impossible to carryout–his soldiers were unable to break it down–he adapted by having the companies fall out so the men could swarm through the open gate, reforming among the trees.  Later in the battle, Gordon’s 2nd Massachusetts–the regiment of young Captain Robert Gould Shaw, who gained modern fame in the 1989 film Glory–formed along the fence’s southwestern corner to resist the efforts of Colquitt’s Confederate brigade to retake the Cornfield.

Left – The D.R. Miller farm.  The house is the uppermost black square, in the map’s center, with the orchard to its right;  Right – The 2nd Massachusetts deployed in the Miller’s orchard.

This detail reveals a separate building immediately behind the Miller’s house, which may be the former blacksmith’s shop.  Built by John Myers–along with the main house and other structures–sometime before 1836,  this may have been the original log house.  This structure stood during the battle, but had been removed by 1904 (when the Carman maps, used in this post, were created).

Another detail from our first image is of the fence across the road leading to the Miller’s house from the Hagerstown Pike.  Not depicted in the Carman maps or mentioned by any soldiers (to my knowledge), it’s unclear if this gate was present during the battle.  the wear on the gate and the repair work–indicated by differing widths and finials of the picket boards–suggests it may date to the battle.  If so, it is possible the round holes in several boards may be the effects of rifle fire.

Our second image is this revealing view of the Dunker Church and the Hagerstown Pike (the other white building and fence are post-war):

“Antietam. Dunker Church from S.E. looking across the Hagerstown Pike.”  [6]

Here’s a closer image of the key battlefield potions of this photo:

Running along the Hagerstown Pike is the famous post-and-rail fence, which so bedeviled both armies on 17 September 1862.

On the right side, through the thin tree line, is the grassy field and the eastern edge of the West Woods (today the Philadelphia Brigade monument dominates this ground).  Stonewall Jackson deployed Jones’ and Winder’s brigades, and later Jackson’s division, on this ground before dawn on September 17 to defend the Confederate left.  Confederates of Starke’s and Taliaferro’s brigades were driven across this position by Wisconsin regiments of Gibbon’s Iron Brigade.   Later in the morning, General Edwin V. Sumner’s II Corps men from Sedgwick’s division attacked over this same ground before entering the West Woods – and fled across it, chased by McLaws’ advancing Confederates. 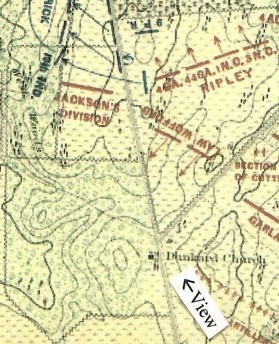 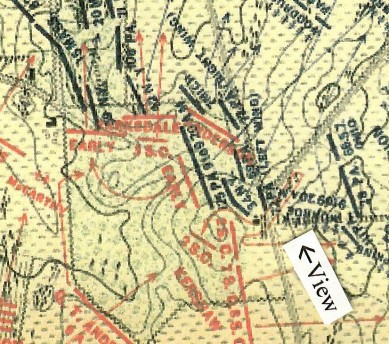 Third up is this view of the famous Dunker Church:

This close-up of the church shows why General Hooker chose this (once) bright-white, easily-seen building as the objective of his opening attack through the Cornfield: 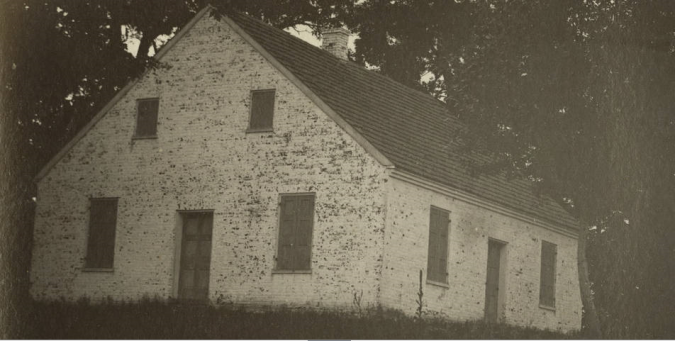 Badly damaged during the battle, this view certainly reflects the repair and refurbishment done by the congregation, which had been completed by 1864.  It’s unclear if the extensive darker spots and splotches on the church’s façade is weathering, remaining damage from musket fire, or both.

Our fourth image is this view from the Dunker Church, looking southeast toward the Sunken Road:

This is the ground on which S. D. Lee’s Confederate artillery was deployed in the early morning and later, over which Kershaw’s South Carolina regiments advanced to strike Union troops north of the Sunken Road.  In midafternoon, the 7th Maine and 20th New York from Irwin’s brigade in the VI Corps occupied this same ground. 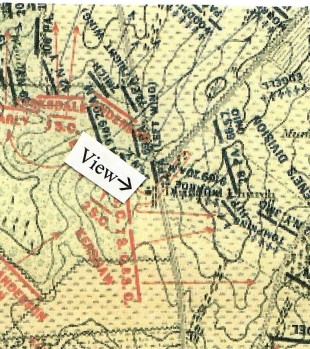 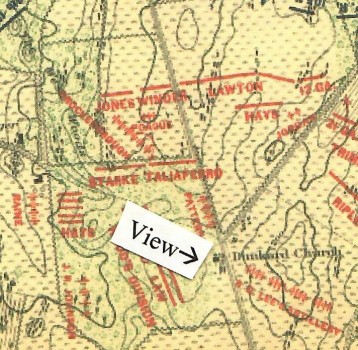 Finally, here is the view of Antietam Creek from the Pry House, General McClellan’s forward headquarters throughout the battle.  This photograph offers insight into McClellan’s view during the battle, in this case looking directly north:

“Antietam from Fry [sic] House, McClellan headquarters, looking between East and West woods, up the Antietam river about N.W.”  [9]

Enlarging portions of the center this photo reveals Antietam Creek and the Pry ford, just below the Upper Bridge, as well as the Samuel Pry Mill buildings (the two white objects on the right):

This enlargement shows the ford below the Upper Bridge, where some of Hooker’s I Corps troops crossed the Antietam late on September 16 and which Sumner’s II Corps units used in crossing during the battle.

These unique images are a true gift to modern America but there are many more than I’ve included here.  Visit the Southern Methodist University’s DeGolyer Library’s website to see more wonderful images of Antietam, Cedar Creek, Harpers Ferry, and much more. 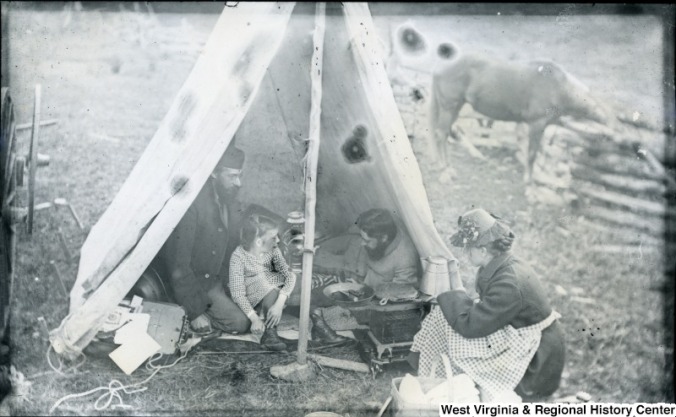 Thomas Biscoe (left) and Walter Biscoe (right) having breakfast in their tent at 6:30 in the morning on July 11, 1884. The girl in the tent is probably Thomas’ daughter, Alice, while his second wife, Mary Ellen, serves coffee.  The wagon in which they traveled is on the picture’s left edge, while their horse grazes in the background. [10]

[9]  “Antietam from Fry [sic] House McClellan headquarters looking between East and West woods, up the Antietam river about N.W.” Call number AG1984.0319, DeGolyer Library, Southern Methodist University.  Despite the title of this picture, implying that both the East and West Woods are pictured, it does not capture the view of these two important landmarks.